PATRIOTS Dominate Over PANTHERS in Week 3

With a 6-2 lead, the PATRIOTS enter the second half refusing the notion of it being anyone’s game, but their own.

Coming off two straight wins to start their season, the PANTHERS arrived at the field determined to keep their record clean. The PATRIOTS, well, they just came to win.

In the PANTHER’s pregame preparations, Head Coach Jay Morrison put pressure on his defense, running through offensive plays himself and critiquing how his players could have been more prepared to stop his runs.  Unfortunately, defense is still where the PANTHERS came up short against the PATRIOTS. 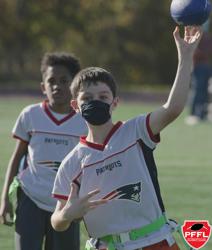 The PANTHERS offense was quick to impress with a strong running game. Receiver Koby Collins caught everyone’s attention with his laser focus instinct to find his path wide, hit the sideline, and take off like a racehorse. Few teams would be able to stop him, however the PATRIOTS were at no loss for speed with Isiah King and Ewan Werksman on their side making clutch flag stops.

The PATRIOTS had a slight height advantage over the PANTHERS, leading to early interceptions and detrimental stops for the PANTHERS’ passing game. While the PANTHERS kept their offense clean and organized with motion plays from Judah Tench, a small but mighty running back, the PATRIOTS proved how improvising can triumph. With a 6-2 lead, the PATRIOTS enter the second half refusing the notion of it being anyone’s game, but their own. 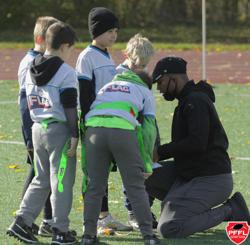 The turning point of the game took place after two short possessions from the PANTHERS, thanks to an interception by Makhi Craig early in the second half extending PATRIOTS’ lead. PANTHER teammates and brothers Koby and Kole Collins were consistent defensive threats with their speed, making Makhi’s agile ball carrying a vital asset to PATRIOTS momentum.

With less than two minutes in the game, Makhi runs the ball down field picking up 20 yards. Ewan finishes the drive with a short but powerful 10 yard gain into the endzone. PATRIOTS seal their win with a two point conversion from their new Center, Jayasha King,  back petaling into the endzone. This was not only Jayasha’s first score of the season, but also her debut game in the league. The PATRIOTS declare themselves a threat in the division with a final score of 32 to 10 over the PANTHERS and a new record of 2-1-0.