STEELTOWN spent most of the second half on cruise control, churning the clock 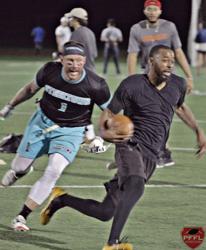 On Monday night, the PFFL Adult League kicked off its Fall season on Monday night with a series of doubleheaders. And while it was evident that many teams needed some time to get back into the football groove, veteran-laden STEELTOWN showed no signs of rust as they rolled to an easy 28–12 victory over KRAZY 8’S.

All night, STEELTOWN operated with the precision and chemistry that only comes from years of terrorizing flag football teams. Quarterback Chris Sullivan dissected KRAZY 8’S’ defense to the tune of 15/21 passing with three touchdowns and just one interception. Two of those scores went to Jeremy Greenawalt, who repeatedly outran slower defenders and overpowered smaller ones. Anthony Garrett finally broke the goal line for KRAZY 8’S as time expired in the first half, but only after they’d fallen behind 22–0. 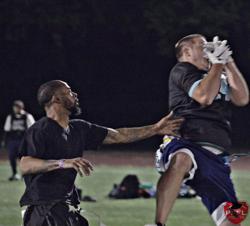 STEELTOWN spent most of the second half on cruise control, churning the clock and Midway through the second half, it briefly appeared KRAZY 8S figured out the STEELTOWN defense, as Reed hit on a second touchdown to Al Anderson to bring KRAZY 8S within 10—and the closer they pulled, the more confident they got. “Comeback starts here!” they shouted. The key word here, though, is ‘brief’—on the very next play, Anthony Steban dusted the KRAZY 8’S secondary on a bomb from Sullivan for a walk-in touchdown to effectively seal the win. 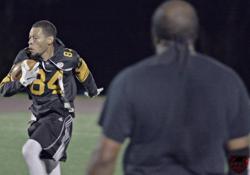 STEELTOWN’s victory moved them to 2–0 on the young season, and they’re currently at the head of the class alongside VENGEANCE. On the other side, KRAZY 8S’ loss kept them winless and dropped them to the bottom of the standings. STEELTOWN has long been a regular near the top of the PFFL standings, and through one week, it’s looking like they’ll be right up there for at least another season.